So Zonnebloem has had their Old Mutual Trophy Wine Show gold medal stripped, as the 2007 Laureat was entered in the ‘Bordeaux Blend’ section but had a “dollop of Shiraz” in it. Fair enough. Bordeaux blends can only be made up using Cabernet Sauvignon, Cabernet Franc, Merlot, Petit Verdot and Malbec. Over at Wine Goggle (who seemed to have broke the story before Wine.co.za) some interesting points are made about how single varietal wines, however, are allowed a 15% dollop of something else. So if you had a wine that was 75% Cabernet Sauvignon with 5% Cab Franc 5% Merlot and 5% Petit Verdot it could be entered in either the Bordeaux blend section or the Cabernet Sauvignon section. Hmmmm….Numbers get boring.

What interests me is how top dog Mr. Fridjhon learnt of this. I quote from the Wine.co.za story:

Show chairman, Michael Fridjhon, who made the discovery having read an interview with a member of the wine-making team – in which the presence of a "dollop of Shiraz" was disclosed

Haha, that poor girl or guy – although this strikes me as a typically male thing to do. I can just imagine it.

“Ja bru, it was my idea to add a bit of spice so we chucked in a dollop of Shiraz.” So proud. An interview and everything. Now he is going to get kaked on. Hard.

Just think about all the sales that will now be lost. You see the South African public loves to buy their wines based on round shiny stickers. Personally that would make me feel like a magpie, but that’s just me. Or some sort of half-wit: “Ooooh shiny, me wanty wanty.” And that, my friends, is why the South African wine-buying public are a bunch of half-witted magpies. Love you too.

Back to the naughty Zonnebloem employee. I wonder if he is going to be hauled into the head wine-makers office and berated for having a loose tongue in front of the press? I think he should be as this is pretty embarrassing for Zonnebloem. I mean this wasn’t a simple mistake; they knew there was Shiraz in the wine and entered it into a Bordeaux Blend section of a competition. Kind of like doping. That would make Zonnebloem is the Floyd Landis of the wine lands. 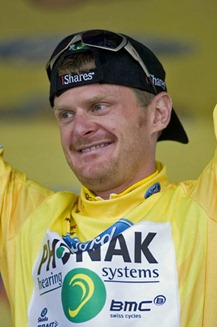 The Zonnebloem of the cycling world

This has to make you wonder if any of the other Bordeaux blends have dollops of anything in them? Maybe they do and the farms that produced them just have staff with tighter lips.

View all posts by Harry Reginald

2 thoughts on “Someone is in shit at Zonnebloem”